Apple introduced a flagship phone as its 10th anniversary. iPhone X made a huge impact on the mobile phone industry. It has some revolutionary features that have never seen before. One of the most well-known features is the iPhone Face ID or iPhone face recognition. But how face ID works on iPhone X.

The face recognition technology is the device’s signature feature. It is a new security system for the iPhone. It becomes a media sensation nowadays.

After heard this the first thing comes into mind how to face ID works on iPhone X. This question followed a lot of question. Let’s find this.

What is Face ID

Let’s start our discussion with a very basic question. What is Face ID? Face ID is a form of the biometric authentication system. Fingerprint recognition is also a form of biometric. This system uses the front camera to authenticate the user. As the name suggests Face ID scans your face to unlock your phone.

The Face ID technology uses most advanced hardware and software. The unit including front camera infrared camera, dot projector, and flood illuminator is placed on the front-notch on the iPhone X.

The TrueDepth camera projects over 30,000 dots onto your face. For the points on your face, the reflection of the infrared wave is measured by the sensor. It allows the system to calculate depth and angle from the camera. By calculating each dot it constructs a depth map of your face. 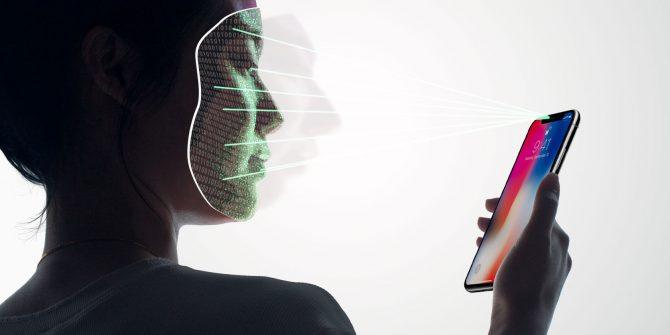 As our eyes are not made to see infrared light, the dots are invisible to us. If you are very much curious about it you can see them through an infrared camera.

When we set up the Face ID the 3D map constructed by the system was save in iPhone X’s A11 Bionic chip. When you want to unlock the phone, the iPhone X’s front camera analyses the dots on your face and compares it to the constructed image made when Face ID was set up. The phones have “neural engine” then transforms this data into a mathematical representation, and compares both the facial data stored on the chip. If the two image match, then the phone unlocks.

Can Face ID be fooled

We have resolved the most important query How Face ID Works on iPhone X. So comes to the next. Apple says it is nearly impossible to fool the Face ID system. Apple claims its iPhone face recognition, the neural network is much intelligent to spot and restrict attempts to unlock your phone with photos or masks. If you are a tech geek you can try to fool the system. But the chances of success is very very negligible. After Apple release of the new security system ( Face ID), many companies try to copy the system because the system is very much secure and faithful.

The company says intelligent Face ID has a 1 in 1,000,000 chance of being a fool. Many unsuccessful attempts were made to fool the system. Some people tried Face ID with twins but Face ID stands still and wasn’t fooled.

Is the Face ID secure

Well, we have covered the two most important query How Face ID Works on iPhone X? And can face ID be fooled or not. Let’s move to the next.

Apple tries its best to give a lot of importance to user privacy. The company says the data collected by the facial identification method is secure and encrypted. The encrypted data is stored on your device and never backed up to the cloud storage like iCloud or anywhere else.

Nowadays our phone is very much sensitive. It contains many sensitive data like banking details and our social media profiles. Most of the time we don’t log out social media profile thinking that it is untouched. If your friends unlock your phone they can easily play with your profile. It may cost you much in the latter.

Apple restricted other apps to the memory area where the sensitive information stored. Some other apps have limited access to the data.

For an additional layer of protection, Face ID allows only five unsuccessful match attempts. If the limit exceeds a passcode requires unlocking your iPhone.

We have started our discussion with how to face ID works on iPhone X. Although it is a new technology but impacts a lot. Face recognition technology passes through the iris scanner on the Galaxy Note 8. Face ID system little bit intelligent can adapt to hats, scarves, sunglasses, and. The new Face unlocking system is spreading across the globe like a forest fire. Many companies try to copy the whole system. They try to implement this Face ID system in their flagship phones and enhance security. It also adjusts to changes in face appearance – like clean shaving. The good thing about Face ID is that it works from almost all angles and unlocks the phone with ease. Although some tech expert penetrates the system, it is a faithful security feature.

75 shares
We use cookies to ensure that we give you the best experience on our website.OK